UNMARKED SPOILERS! Sarine is one of the main antagonists, having fighting strength that surpasses Artemisia. Despite her diminutive appearance, she dominates the battlefield with her strength. She is the wife of Kaiser, having died at childbirth. She then was used by her husband to do his biding. [2] 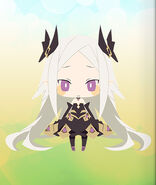 Add a photo to this gallery
Retrieved from "https://lordofmagna.fandom.com/wiki/Sarine?oldid=5248"
Community content is available under CC-BY-SA unless otherwise noted.